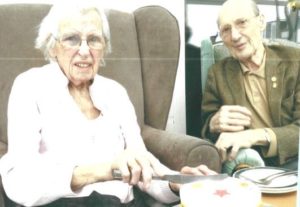 Margaret, known as Ellen, and Gerald Bailey have known each other for an astonishing 85 years, first meeting in 1933 when they were just 7 years old.  They first crossed paths when Gerald’s parents bought a grocery shop in Ilfracombe and Ellen just so happened to live on the same street.

They became Mr. and Mrs. Bailey in 1952 after a joyful ceremony held at St Peters Church in Ilfracombe and will celebrate their 67th wedding anniversary in March.

Ellen and Gerald, along with other people living at Edenmore, enjoyed the musical talents of Terry Charles who is a part of the local band ‘The Grumpy Old Men’ – an integral part of North Devon’s entertainment.  Terry plays 50’s and 60’s music along with some country and reminiscent numbers, there’s a song for everyone which is why he is welcomed back at Edenmore time after time.

Terry has been performing and entertaining the people living at Edenmore Nursing Home for over 10 years and is a firm favourite amongst family members and care team alike. “I love performing at Edenmore, I enjoy every show I perform.”